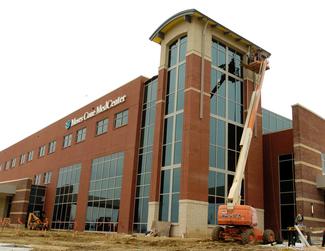 Moses Cone’s new emergency facility is located on Williard Dairy Road, near the intersection with N.C. 68.

HIGH POINT – The Moses Cone MedCenter High Point will open June 1 after nearly a three-year process and a $30 million investment.

The three-story, 76,000-square-foot facility at 2630 Willard Dairy Road will be a 12-room, 24-hour emergency department with a laboratory and imaging center with CT and MRI technologies and will serve north High Point and the surrounding area.

Access and convenience are two benefits of the emergency department, said Deno Adkins, director for outpatient development at Moses Cone.

“The northern High Point area is under-served in terms of medical services,” Adkins said, adding that this facility ensures that the community is adequately served, not only with emergency care services but with primary care and specialists.

The facility was established out of a growing need in the area. Karen Pierce, director of campus projects for Moses Cone, said the hospital examined where patients were traveling from, the growth of the area and the anticipated need for new services.

“It is a grand opportunity to both increase our capacity of emergency services across the county and the communities we serve, but also to bring that care closer,” Pierce said.

The Moses Cone MedCenter is unique not only to the area but to the state, said Doug Allred, public relations specialist for Moses Cone. A stand-alone emergency department, there are only two other similar facilities in the state, and they are located at Wake Med, Allred said.

“It’s new to North Carolina,” he said, adding that it will allow patients easy access and parking, unlike going to a hospital.

The development process began almost three years ago when Moses Cone applied for a certificate of need Sept. 15, 2006. They initially faced opposition from High Point Regional Hospital, who appealed the certificate of need request, saying it would negatively impact the patient volume and revenues at High Point Regional. They dropped their opposition May 22, 2007, and construction began April 3, 2008.

The number of jobs the facility will provide is not yet confirmed, Adkins said. “I’m sure there is a positive economic impact,” he said, adding there likely will be a number of new hires.